He used to suck his thumb - not regularly, and for a very short while during his teething.
He was too fond of it, so much so that his thumb began to get marks. His paediatrician saw those and said we must relentlessly pull his hand out of his mouth, else he could get an upset stomach.
So as righteous parents, we became extra alert and got him mittens to cover his fingers. In fact we even discovered t-shirts that had extended sleeves which could be turned around to cover his hands. In response, our resourceful kid found a way to free just his thumb from the enclosure so that he could satisfy his cravings. The only thing left to do was keep pulling at his hands, and he made a game of it...we would pull, he would follow with a determined mouth, and smile at us whenever he would score.
Priya was discussing this with a friend who's son is almost the same age, and was doing the same thing. Their paediatrician had also told them to pull the thumb out, and all their tricks had not had any success either. Now, Priya's friend herself used to suck her thumb till she was in the 6th Standard, so I'm told. And she used to feel absolutely heartless that she is depriving her son of "such a tasty thing".
I found this very intriguing, and one day, when no one was looking, I sucked on his thumb.
That feeling...!!!...it was delicious, soooo delicious...oh-so-delicious...
Scribbled by Jainz at 5:13 PM No comments:

He is generally a happy child. Leave him to his own devices and he will spend hours in his own universe, engrossed in whatever he is doing - books, containers, toys...
He'll mind his own business, and not interfere in yours.
But some days, you'll know right away that he got up on the wrong side of the bed.
He'll be distracted, disturbed, distressed...

One day, he just got up crying. From the moment he awoke, all we had heard was his soft wailing.
He wouldn't brush his teeth, or have his milk, or biscuits...and when he refused his favourite juice, we knew we were in trouble.

Priya was at her wit's end, having tried to pacify him everywhich way...and just decided to go through the routine, with him being a strong supporter of the non-cooperation movement. Somehow she fed him, gave him a bath, dressed him...
And all he did was ऊँ  ऊँऊँ  ऊँऊँऊँ

Things finally came to an head and she asked him, "What do you want, Shlok ?"
And almost as if a magic wand had been waved...he instantly stopped crying, and teary eyed, uttered just one word - तोकलेत
Scribbled by Jainz at 1:54 PM No comments:

Child is the Father of Man

Being a father is beyond anything I had imagined.
To see a young life take shape before your eyes, fills you with exhilaration, and fear.
When he copies every little thing that you do, its scary.
My little one makes me want to be a better person.

Kids are a clean slate, on which you write what you fervently hope are positive influences.
They are like sponge, forever absorbing everything.
They have sooo much to learn, everything around them is a new experience. They are on a constant voyage of discovery - a different texture here, a loud sound there, a new taste, a smell to remember...
And through all this, you pray that you are setting a good example.

The joys of fatherhood are many - he runs to you when you come back from office, he waits for you, listens to you, tells you about his day ( in babytalk ), brings you his problems ( mostly broken toys, or those with batteries gone dry ) and trusts you to make everything alright for him.
And they are completely aware that they have you all wrapped around their little finger.

Life is a miracle, and to see it bloom a little bit everyday, with you being completely responsible for it, and knowing that he is solely yours, is heavenly.
Scribbled by Jainz at 1:34 AM No comments:

~ If you do what you did, you will reach where you are.

~ If there was a list of Top 50 people in any field, which list would you appear in ?

~ I don’t like all this talk about Indian firms not investing enough on RnD.
What is your Annual Individual RnD expense ?

~ The greatest leveler in the world is the 24 hours in a day. Everybody gets exactly that…
You and Mukesh Ambani and Bill Gates…

~ Everything’s OK in the end,
If its not OK, its not the end.

~ A simple test to know if your mission on earth is complete.
If you are alive, it isn’t…

~ If it was your last day on this planet, and you were allowed only one phone call…
Who would you call ?
And what are you waiting for ???

~ Never say I Love You if you don’t mean it.
But if you mean it, say it often. People forget…

~ Oh how I wish I could be a child again !
Skinned knees are easier to mend than broken hearts.

~ There’s a book by Robin Sharma titled – “Who will cry when you die ?”
I think its more worthwhile to ask – Who will Die when you Cry ?
Scribbled by Jainz at 10:43 PM 1 comment:

The sister-in-law of a friend of mine will be getting married soon.
She has been staying with them for some time now, and gotten to know all the rest of us rather well.
Though a little shy in the beginning, she has made a place for herself in our gang, with her wit, humor and basically because she turned out to be as crazy as the rest of us.

There is quite a bit of hustle bustle around their household these days with regards to the preparations and planning and everything...
Recently, during a chat, my friend generally mentioned in the passing, that "yaar, soon she'll be gone"...
And it struck me that yes, suddenly there will be one person less in the house !!!
And to top it all, this one will be flying off to the US after the marriage, as her fiancee is based there. So its gonna be quite some time before we get to see her again.

And I realised that I'm gonna miss her too...had kinda gotten used to her being there.
My trips to Pune were often spent at their place, and she was good fun to have around.
Primarily because she was our common punch-bag, the poor thing used to bear the brunt of most of our practical jokes, but more so because she was a jolly good sport.
Soon, it'll just not be the same again !!! There will be a void left behind. And nothing can fill that up.

How much more difficult must it be for her parents ?!?!?

Now this friend has a daughter, who is 15 and half months old.
An absolute darling...she has me all tightly wrapped around her little finger.
And when she gives me her dimpled smile, I inadvertently look around, in the hope that if her parents aren't looking, maybe I could just scoot her up and run...
And it rips my heart to think that some time in the future, she also will come of age and go away with her husband.

And if this affects me so much, what must the parents go through ???
How do they console their hearts ? That the one they have brought up with so much love and care, has to be given away to somebody else...a veritable stranger !!!
Aise kaise koi apne jigar ka tukda kisi aur ko de de ?

I fell in love once, and the girl knew that her parents wouldn't ever accept me.
And I wanted the girl to come away with me, all the time promising her a lifetime of love and care and nurturing and pampering and tenderness...and soft toys and chocolates and...books and music...and rhythm and dance and...
But she didn't want to rebel against her parents, said she wouldn't...

And today, I said a silent prayer for her, blessing her for doing the right thing.

As it is, the parents go through this whole lot of heart-ache...the least we can do is make it a little easier for them.

I used to love her, yes, but then, sometimes, love is not enough.
Scribbled by Jainz at 10:10 AM 5 comments:

Welcome to my family, dude…looking forward to having some great times together !!!
Scribbled by Jainz at 10:06 AM 3 comments: 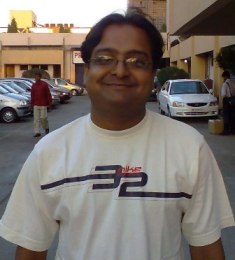 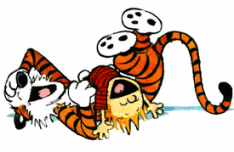